And the winner is...

It's official: a reader (that I know of) has received an actual, printed copy of Arusha. While some sites are still staying "pre-order" even though today is the 25th of August, the original Amazon bookstore managed to get a book from Minneapolis, where it is located, to New York City yesterday!

There is a lot of fear and hatred coming out of the U.S. health care debate back home. But most of all, there is a lot of rubbish. Americans who have never lived in another country, and therefore experienced an alternative to the U.S. "system," are panicking about what they do not know.

I remember, when I lived in the U.S., a dying friend telling me, whatever I do, make sure my job offered health insurance. Since I've lived in other industrialized democracies, of course, that fear is gone. I never have to worry about losing health care, no matter what happens to my job.

But don't ask me--listen to veteran journalist T. R. Reid, whose family has lived all over the world.
One of his key points is that it is actually less costly--in both health and money terms--for other countries to pay for preventive care. Preventive care costs up front, but it works in the long run to keep people healthy, as well as save money. When health care is a public responsibility (i.e., in every industrialized democracy except the U.S.), there is an incentive to pay for prevention. In the U.S., where you typically change (or lose) insurance every few years, there is none.
Posted by J. E. Knowles No comments: 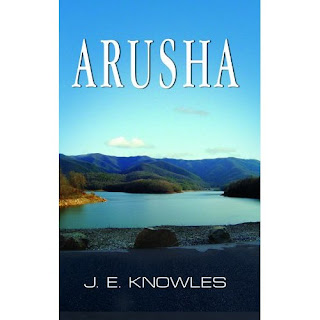 Arusha is published today by Attitude Books (Spinsters Ink), in both print and e-book formats.
If you are in the Toronto area, I hope you will come to my book launch with Glad Day Bookshop.

For options outside Toronto, please see Buying Books? You Have Choices!

"Arusha is a quietly affective, gracefully written and heart-wrenching novel, written in an assured, convincing and sympathetic narrative voice, about a woman’s struggle to break free of the strictures of family, religion and societal convention and find her own kind of happiness."
-- Kim Moritsugu, author of The Restoration of Emily and The Glenwood Treasure

"A star is born. J.E. Knowles takes on lesbianism and a whole lot more in this novel of a nuclear family gone nuclear. She explores the damage done by the panicked, blatant homophobia that runs like a lit fuse through America. Her first novel is impressive in its characters, construction and evidence of storytelling talent. I hope we’ll be reading a lot more from Ms. Knowles."
-- Lee Lynch, author of Sweet Creek and The Amazon Trail
Posted by J. E. Knowles 4 comments:

Canary in the coal mine

(Only italics are mine.)
Immigration Equality Blacklisted by Bush DOJ

The Washington Blade reported on July 15 that, under President George W. Bush and Attorney General Alberto Gonzales, the U.S. Department of Justice “blacklisted” a number of organizations focusing on lesbian, gay, bisexual, transgendered (LGBT) and immigration rights, among other issues, in a campaign to deny employment to applicants who worked for “liberal” organizations.

Rachel B. Tiven, Immigration Equality’s executive director, said in a statement that we were “proud to be the only national LGBT organization included in the Bush Justice Department’s list of dangerous organizations” and that “opponents of equality and justice are right to fear us.”

“While few gay rights groups are included on the DOJ’s blacklist, immigrant advocacy groups make up 25 percent of the list,” she said. “The rights of non-citizens are the canary in our constitutional coal mine, and LGBT people, both immigrants and non-immigrants, know that immigrant rights must be zealously defended for everyone’s sake.”