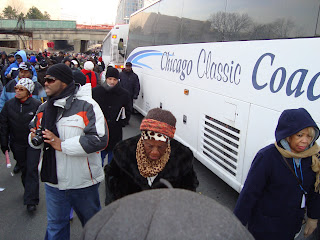 On the 20th of January, I was present at the inauguration of Barack Hussein Obama as President of the USA. My overwhelming sense was of everybody coming together and being nice to each other. We were all so excited, not about a president of one race (he is biracial), but about a president of a united nation. I know it meant something special to African-Americans, and I was surrounded by them, along with Kenyans, Canadians, and people from all over the world. 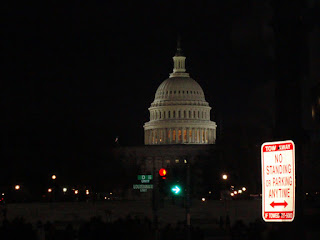 My day began with a ride in to North Capitol Street, with a taxi driver who articulated quite detailed proposals for what Obama should do about crime, energy, and foreign policy. He was a big fan of both Hillary Clinton and the Obamas, but as for the former president (boy, that sounds good!) he said it just goes to show that Harvard is better than Yale! After he dropped me off, he was going to take his two daughters to the Inauguration.

At one point the driver referred, in his heavy accent, to “my country,” and I thought he meant the country where he was born. So I asked which one? He said “United States!” with such indignation that I didn’t ask again! After all, I know what it means to immigrate. 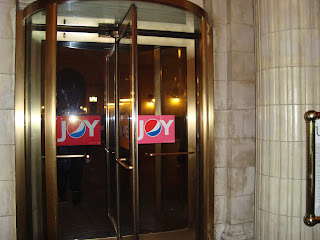 That set the tone for the rest of Inauguration Day. The doors of Union Station had “Joy” and “Hope” signs on them. (And the portable toilets were reasonably clean, even had paper!) There were tons of security personnel, and on one side of Pennsylvania Avenue they seemed a lot less prepared to give information than on the other side of the National Mall. But even when one or two people got frustrated, the mood was so positive. Nobody pushed or was unpleasant. I have never experienced anything like it and emotionally, I’m still taking it all in. At the time I just wanted to absorb the images and the moment, and savor them later. 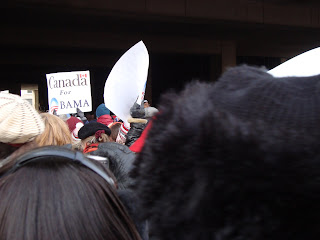 From Union Station, where I could see the Capitol dome glowing in the dark, I made my way down to behind the Canadian Embassy. This was a security checkpoint and Canadian residents (and many hundreds of others) were lining up to get in. There was one lady with a megaphone and I’m afraid we couldn’t hear her announcements at all, so this meant two hours of basically no movement while (I think) ticket holders were let in first. Eventually, I learned that this entrance was for the parade route only (the inaugural parade, scheduled for seven and a half hours later!) and I decided I wasn’t in town to watch a Jumbotron. I wanted to be on the Mall. So after several false starts I found a bicycle cop, who was warming himself on a grate like homeless people would if they had been allowed in the area. This officer seemed confident that I needed to cross under the Mall to get in to the viewing area for the general public. 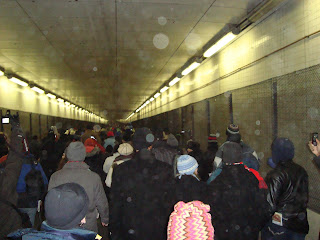 Let me say that all the security services were doing a great job, but some of them only knew one thing, like “this is the exit.” A flight attendant I met later told me that many of these folks were volunteers. I presume this didn’t apply to the sniper on the roof behind us!

I left the Canadians still standing in line for the security checkpoint, and took off with many other people to walk through the 3rd Street Tunnel. Fortunately, there was lots of space and people kept moving, plus I could see the symbolic light at the end of the tunnel! I cannot overemphasize the cheerfulness of the crowds, and I was glad to be moving again, as my feet were getting pretty cold. (Note: pack extra socks for the first woman’s inauguration!) 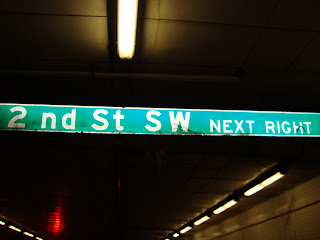 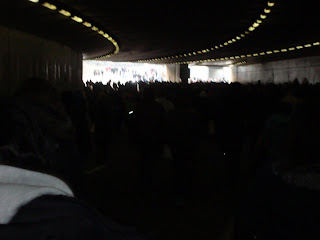 On the other side of the Mall, there were suddenly tons of volunteers, plus a few cute soldiers, telling us where to go. Very friendly attitude, and vendors everywhere too. Memorabilia, not food. Somewhere around the appropriately ugly Dept. of HUD, 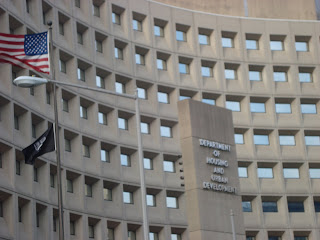 a black man with a very good voice led us in singing “We Want Obama Right Now” to the tune of “Na Na Hey Hey Kiss Him Goodbye.” One of the ladies near me at the bottleneck near 14th St. said, “If people didn’t want anybody touching them, they came to the wrong place!” We laughed a lot. 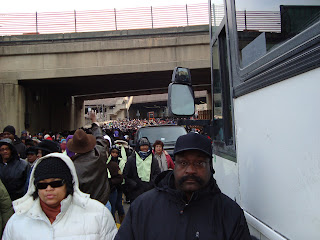 So we walked all the way from 3rd to 14th Streets, waite

d for some vehicles (buses bringing in the marching bands), then all of a sudden the way was clear to the Mall—and the bathrooms! I never had to clear security. Too far back. I am so proud that the Inauguration was free to anyone who wanted to come, and that no one ever said, “Don’t come,” or discouraged people, just because the crowds would be large.

Anyway on the wide-open space it felt a lot less crowded than it probably looked on television. I always forget how huge the Mall is. I was hanging around the base of the Washington Monument. Near me were two young white women, probably lovers, and a Spanish-speaking family with young children. People kept going over and under the chain that ropes off the sidewalk there, trying to see the Jumbotron better. Strangers would help each other. Many folks went all the way back to the Lincoln Memorial because there was another big screen back there, but I stayed as high as I could get. From there, I could see the Capitol,

and hear the sound pretty well—occasionally bouncing off the Monument. There was a group of people protesting Guantanamo Bay. (Within hours, President Obama got the military tribunals suspended there. One of his first acts as president.)

The first thing I heard was the MC, who I now know was Senator Dianne Feinstein, announcing former President Clinton. When President Bush was announced, I heard the crowd boo—I just laughed, I couldn’t help it. As a character says in Emma Donoghue’s Landing: “There’s a special high you only get from dumping someone you stayed with fa 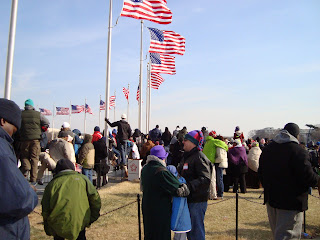 Then Rick Warren gave the invocation. Before the inauguration, there was a huge amount of attention paid to “how homophobic is Warren?” But for me, the high point of the entire ceremony was the closing prayer by Joseph Lowery, who has a rather different position. More on that in a moment.

Itzhak Perlman, Yo Yo Ma, et al played John Williams’s “Simple Gifts” variation, which sounded to me like a ripoff of Aaron Copland’s Appalachian Spring Suite. And around this, the vice president and president took their respective oaths of office. I did not hear until later how Chief Justice John Roberts had administered the words out of order, but both men have since cleaned it up. 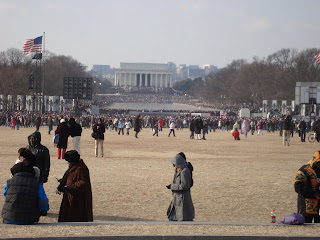 And then we heard the inaugural address, which was directed to the world as much as to us who were there. It was important to me, not that I could see the president, but that he could see us. All of us on this vast area of land, the Mall, which was once used for slave markets. All the way down to the memorial to President Lincoln, who signed the death warrant for slavery.

A gentleman asked me to take his picture with that memorial in the background, and then offered to take mine. He told me to have a blessed year—not day, but year! Only later did I absorb the significance of two strangers, a white girl from the South and a black man, taking each other’s pictures at the Lincoln Memorial. The place where Martin Luther King, Jr. (who would have been 80 a few days before) delivered his “I Have a Dream” speech. 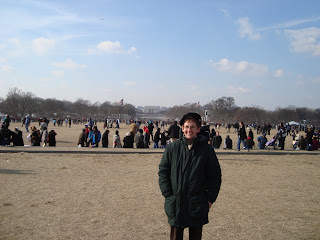 As I made my way back, I heard Joseph Lowery’s benediction: 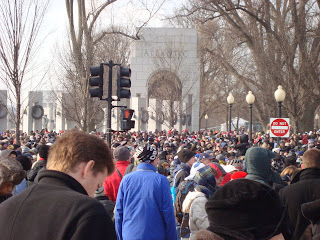 “We ask you to help us work for that day when black will not be asked to get in back, when brown can stick around, when yellow will be mellow, when the red man can get ahead, man, and when white will embrace what is right. Let all who do justice and love mercy say Amen! Amen! Amen!” The most moving part of my whole day was walking in that multicolored crowd of people, laughing, and repeating those “Amens.”

On the bus, I met the flight attendant who told me about all the local preparations. It turned out she went to East Tennessee State University, in Johnson City, where I was born. Altogether it felt like a very small world. 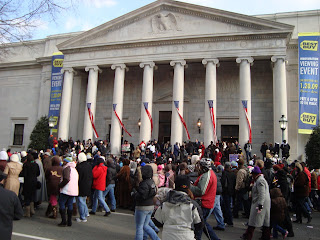 I had told the taxi driver that I’m a writer. So when he let me out, he said, “I hope you get a good report!” I hope I did, too. Have a blessed year.
Posted by J. E. Knowles 6 comments: