All these years of Discreet Traveling, yet I've never posted about this trip. I think because it's too big to write about in blog form. A town in northern Tanzania gave its name to my first novel, Arusha, and crucial scenes were set there. Arusha is about a woman whose life changes, and while those changes don't begin in East Africa, she's definitely a different person once she returns from there.

There are all the other places I've traveled or hope to travel in my life, and then there's Tanzania. It was the most amazing trip I've ever experienced or ever expect to have.

If we're fortunate, each of us has that one place that was perfectly amazing. If you went on a similar trip to mine, it might not be your #1; it is not objective. When I say that nowhere I've been could even measure on the same scale as Tanzania, that is not to take anything away from, say, the Great Barrier Reef off the coast of Australia. Who knows, if I had gone to the Great Barrier Reef when I was 28 and had never visited the southern hemisphere before, that might be the trip by which my mind was most comprehensively blown.

But I didn't and that is why, when I write about Tanzania, I'm not thinking in terms of anecdotes or how hilarious it was when we had to go in and chase off that gigantic spider in my sister's room. I am thinking of impressions, of how different I felt when I went there, and when I returned to Canada.

It's become an important disclaimer in travel writing now "not to be Eat, Pray, Love." Somewhat unfairly to a book that sold very well (and which I remember enjoying at the time), this disclaimer has to do with how wrong it is to be a privileged Westerner projecting one's own needs or inadequacies onto people who live in the developing world. That type of writing, and indeed traveling, takes away from the authentic lives of the people who live in developing countries, and makes travel a selfish experience that is all about us.

Well...yes. We are privileged if we can freely travel to other countries, and it's insensitive if we don't acknowledge that people there have lives of their own, lives we can never fully understand. Some Western tourists clearly don't understand or appreciate this privilege. I'm not just talking about rich Americans who think the thoughtless slaughter of wildlife is a fun way to visit Africa (I'm looking at you, Trump Jr.), but the Canadian whose comments I read on a travel site the other day. She didn't understand why Tanzanians don't pay nearly the same prices as foreign visitors do at Tanzania's national parks, and felt that she had been ripped off. That doesn't show much awareness of the relative wealth of Tanzanians and people who can afford to travel there. Besides, if there were no money in conserving nature, could we really blame local people for farming on that land instead, or otherwise making use of it? We might not be "rich" in our countries back home, but we certainly are from the perspective of most people we meet in the developing world.

As we are learning, being aware of privilege can go a long way. There may not be much I can personally do about the structural inequality in the world, but if I open my eyes and truly try to learn when I'm abroad, I may appreciate its existence in a way that's hard to do sitting at home. Whether I go on to try and do something positive about it is up to me, of course.

But I also find traveling one of the great joys of life and if there is beauty and magnificence in the world, and people working hard to preserve it, then that is a good thing. I want to be there and appreciate it. Having done so, I hope it has affected me personally--that I've learned something and won't see the world in quite the same way as I did before. I don't think it's very responsible not to learn.

Ever since I left Tanzania, I have wanted to go back. I hope when I do that I have more knowledge of and appreciation for Tanzanians, their varied ways of life, and how hard the people work who make visitors' experiences possible. But I do not hope ever to see anything as amazing as a young lion trotting along beside our safari vehicle.

And I know I won't have what turned out to be one of the blessed advantages on that trip fifteen years ago: a simple film camera. The 35-mm camera with which (a better photographer than I) took most of our pictures did not even have a zoom lens. That means that when I look at the pictures now, I know exactly how far away that lion was--even the hunting female with redeye, just that close.

Wherever you go in this world, I hope you have incredible, eye-opening encounters with nature and with people. And I hope you appreciate them deeply. It is a blessing. 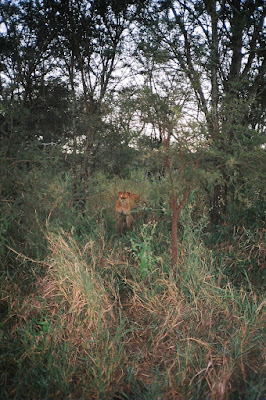